Well, my toddler has decided to sleep in and grant me a few minutes more blogging time, so I'm going to add another post. This one is especially intriguing just because of (1) its simplicity, and (2) the success rate it seems to have. It is simply the combination of Vitamin K and Vitamin C! I've run into this repeatedly, so I'm DEFINITELY going to try this one when the time is right.

"For morning sickness, I recommend 100 to 200 milligrams of B-6 and 10 milligrams of vitamin K a day. Occasionally, more than 200 milligrams is necessary, but this amount should be taken under a physician's supervision. I also give patients an initial injection of vitamin K, which works in a day or two. Taken orally, the Vitamin K takes somewhat longer to produce results - about ten days." - Superimmunity for Kids by Leo Gallard & Dian Dincin Buchman, p. 47

"Vitamin C and K: Both these vitamins used in combination have been shown to reduce nausea in 72 hours; used separately they showed little effect. Vitamin C - 250 mg 2-3 times a day combined with Vitamin K: 5 mg/day. Can purchase liquid Vitamin K-1 from our office if desired." - online (forgot to record url)

I have started investigating this option and have run into the problem that vitamin K is generally sold in 100 mcg doses, meaning that to get 5 mg, one would have to take 50 pills! So we're going to go check out a GNC or vitamin shop to see what they have. If liquid vitamin K is available I'll probably try that, as it seems that it might be more bioavailable.

Don't forget that vitamin K comes in three forms, and most references for this remedy refer to K-1. Don't quote me on that, but it's something to watch for.

* Later note: I just read something that says that K1 is the natural form found in plants, K2 is the form made by your body, and K3 is a synthetic form that's not really that great for you. So K1 (and maybe K2) are the ones that you want, and K1 is what you want specifically for this remedy.
Posted by Diana at 6:32 AM

Were You Looking for “The Whining Puker”?

"Hyperemesis gravidarum (HG) is a severe form of nausea and vomiting in pregnancy. It is generally described as unrelenting, excessive pregnancy-related nausea and/or vomiting that prevents adequate intake of food and fluids. If severe and/or inadequately treated, it is typically associated with: (1) loss of greater than 5% of pre-pregnancy body weight (usually over 10%), (2) dehydration and production of ketones, (3) nutritional deficiencies, (4) metabolic imbalances, (5) difficulty with daily activities."

Extreme Morning Sickness: Articles to Give to Your Husband or Family

Material on this blog is provided for informational purposes only. It is not a substitute for medical care or advice. Please consult your healthcare provider before undertaking any changes to your pregnancy healthcare. Under no circumstances, shall the author be liable under any theory of recovery for any damages arising out of or in any manner connected with the use of information or documents from the site. 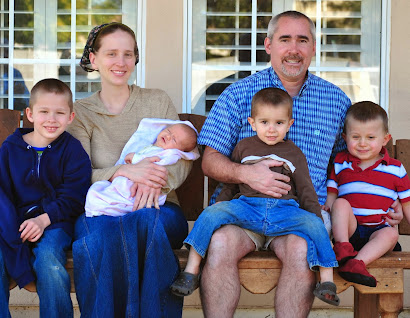 My name is Diana, and I am mama to one babe in eternity and five children here on earth. I am passionate about my family, my home, and my Christian faith! My time is spent serving my family, loving and educating my children, and battling minor addictions to book lists, crock-pots, and plastic storage boxes. In my spare time, I dabble in minimalism and Plain living. This blog covers all sorts of things to do with marriage, motherhood, home education, and all of our adventures. I’m glad you’re here - thanks for dropping by!